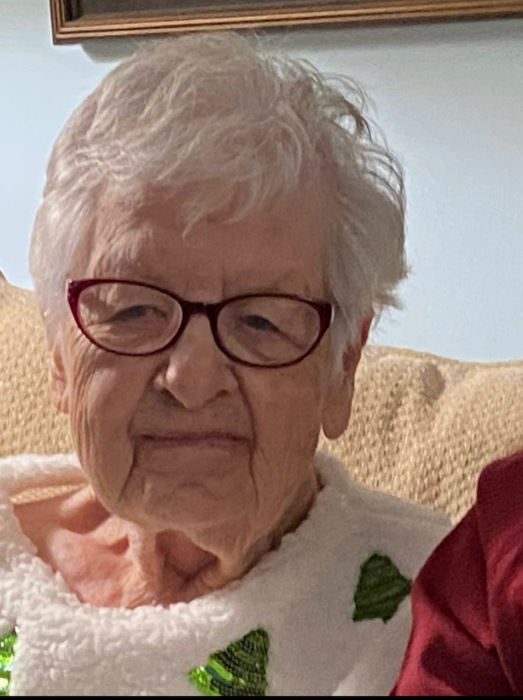 Shirley Louise Lund, a 50-year resident of Broomfield, Colorado, passed away on Sunday, February 13, 2022 in Columbus, Ohio. She was 97 years young.  Shirley is preceded in death by her husband Harry Lund, son David Lund, and daughter, Nancy Lund Pena.  She is survived by her son Craig (Ann), grandson Andrew of Columbus, OH, Nancy's daughter Sarah Fleming of Austin, Texas; David's wife Annie of Broomfield, CO and children Don Lund (Dena), Jeff Lund, Brad Lund (Amy), and Kevin Lund with many great-grandchildren between them.

Shirley lived an active life. She and Harry moved from Minneapolis, MN in the early 1950's where they met in a table tennis club when Shirley was 14 years old.  They were happily married for 58 years raising three children while pursuing their interests in professional table tennis, bridge leagues, bowling, and golf.  Shirley was an avid crafter with her favorite crafts of cross stitching, knitting, stamping, and crochet.  Those were her activities when you could get to sit down.

She enjoyed correspondence with women who were born in 1924, her birth year. She formed and developed "The 1924 Club" by publishing a bi-monthly newsletter that circulated nationally.  The content was provided by her readers connecting them with like minded woman around the US.  Shirley's volume of mail required bags because the mailbox was too small.  During she and Harry's activities, they formed lifelong friends.  During the table tennis years, she played against Bobby Riggs and won in an exhibition match.  During her bridge playing years with Harry, they met Eddie Kantor.  Shirley was a bridge Life Master.  Shirley was inducted into the Minnesota Table Tennis Hall of Fame.  During her later years, Shirley enjoyed all the Colorado sports teams, watching them religiously on TV.

Her Ohio family finally convinced her to watch the Ohio State Buckeyes with some nudging.  She enjoyed games of chance. Shirley before retirement worked full time for the Federal Aviation Administration at Jefferson County airport in Colorado. She helped her sons David and Craig open the Broomfield Donut Factory (Spudnut) donut shop in Broomfield. At the Claremont Retirement Village in Columbus, OH Shirley will be missed.  She made many friends who shared her love of games.  She played bridge and more recently, Rummikub every Tuesday and Thursday with her neighbors.

The family wishes to thank her friends and the staff at The Claremont for their friendship and assistance.  You know who you are.  She loved you all. A graveside service will be held at the Mountainview Cemetery in Longmont, Colorado on March 2, 2022.  Condolences and messages to the family can be left at www.graumlichfuneralhome.com in Columbus and Howe Mortuary in Longmont. Arrangements with GRAUMLICH FUNERAL HOME, 1351 S. High St., Columbus, Ohio and Howe Mortuary 439 Coffman St., Longmont, Colorado 80501.

To send flowers to the family in memory of Shirley Lund, please visit our flower store.