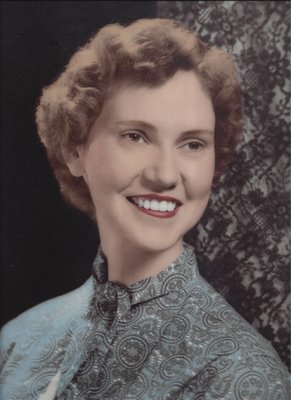 Flossie May (Vincent) Gooch, age 83, of Columbus, passed away September 11, 2017. She was a courageous, fiercely independent woman who continued working even after she had her "MRS. degree" so that her family could have the life she wanted for them. She never met an art or craft she wouldn't try nor a set of dishes that couldn't find a place in her busy kitchen. She was involved throughout her live with a number of church groups beginning with the King Avenue UMC where she met and married her husband (Ray Arthur Gooch Jr.) in 1957. Flossie joined the Thurman Avenue UMC women's group when the family moved to Merion Village in 1965. She was always active with diverse activities; Girl Scouts, exercise class at the rec. center, doing her own charity work with "Christmas Cups" for the homeless, and always willing to help someone in need. Opinionated and tenacious with a strong sense of right and wrong, she drove some co-workers crazy. Retirement for her was helping her husband through Parkinson's so that he could end life in his own home. They celebrated their 51st wedding anniversary before his death in 2008. Beloved daughter of William Jacob Thomas Vincent (deceased) and Ethel Fay (Appler) Vincent (deceased). After the death of her mother in 1943, she was raised with her aunt Ida May (Vincent, Appler) McNichols (deceased) and uncle Oliver Clay Appler (deceased) as a sister to their daughter Sharon Ann (Appler) Leasure.

Flossie is preceded in death by her brothers Herman, Manford, and Dale as well as her "sister" Sharon.

To send flowers to the family in memory of Flossie Gooch, please visit our flower store.